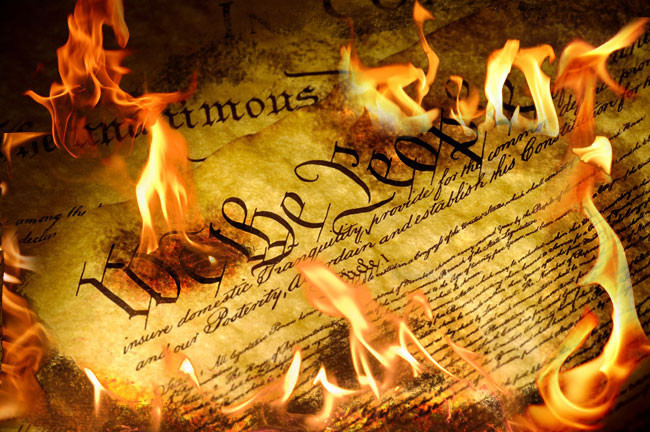 I have reached the conclusion that the Obama administration is intentionally conducting a 6 part multi-front campaign both domestic and in the foreign arena of traitorous design in order to complete the final and “fundamental transformation” America.

One major front is Comprehensive Amnesty with an expedited path to citizenship for 15-50 MILLION “undocumented” democrats. The GOP is fully collaborating in that endeavor (1) and the granting of citizenship to those illegal immigrants would guarantee permanent one-party rule in America. As it would provide the needed votes to fundamentally transform the Constitution through the amendment process and would be entirely legal.

The second domestic front is in the area of unsustainable debt and willful obstruction of the American economy’s ability to restore itself. 92 million Americans are out of work and 2/3rds of the jobs created under this administration have gone to illegal immigrants with 75% of all jobs created being part time jobs. That shall, sooner or later result in sovereign bankruptcy and the collapse of America’s financial system.

The third domestic front is in creating the conditions conducive to a pandemic outbreak. A pandemic in America will also create panic, impede both our food and transportation networks, overwhelm our medical network and result in bi-partisan demands for protection.

“The deliberate, considered, and premeditated response of Federal agencies across the board has been to bring as many disease vectors into this country as they possibly can, to forcibly prevent them from being medically screened, to scatter them throughout the country, and to actively impede state and local health authorities from responding to any disease outbreaks triggered.

And all of it spread in the last couple of years with the help of all agencies of the Federal government.

This is a level of “incompetence” that cannot be blamed on one or two individuals. It crosses several Cabinet level departments with them working together for a common result. Which we are seeing now. That level of “incompetence” is in fact planning and premeditation. The odds of multiple departments committing reinforcing acts to bring this result by pure chance are beyond credibility. Especially, since not one of them are responding to the breaking reality with changed behavior.”

The other major fronts in the administration’s campaign involve purposely driving this country toward a crisis sufficient in severity to require a declaration of martial law for “the duration of the national emergency”. It is critical to the hard core left’s design, that the crisis be severe enough that calls for the restoration of order be ‘bi-partisan’, as this is the only way that the US military will stay neutral and not interfere. These other major fronts consist of Iran’s pursuit of nuclear weapons capability and infiltration through our open southern border of Islamic terrorist cells.

Iran’s achievement of nuclear weapons capability will create several consequential results; an arms race in the region and the consequence of nuclear proliferation into unstable third world regimes and Islamist States with the resultant certainty that nuclear weapons will then fall into the hands of terrorist groups like ISIS. Iran will also possess the nuclear leverage needed to hold oil passage through the Strait of Hormuz hostage. Fully one third of the world’s oil passes through the Strait of Hormuz and holding that oil hostage would provide Iran with an economic stranglehold on Western economies. Obama’s secret Iranian ‘containment’ policy, inadvertently revealed by SecDef Hagel (2) will address none of these factors and SecState Kerry (3) has inadvertently revealed that Obama is well aware of this reality.

Islamic terrorist cells, who have and are infiltrating through our open southern border will soon begin a campaign of terrorist attacks against Americans. We know they have MANPADS (4) and smuggling them into America will be relatively easy. MANPADS can be used to shoot down American passenger jets at takeoff and landing when they are most vulnerable. Mumbai and Kenyan Westgate Mall style terrorist attacks on American malls will provide the ‘opportunity’ for ISIS to behead American women and children on American soil and upload it to websites for broadcast to the media. Multiple attacks on American passenger jets and shopping malls will create panic and bi-partisan demands for protection.

The US is vulnerable to a nuclear terrorist attack upon a major US port city through a nuke being placed aboard a commercial container ship and detonated once it reaches port. Twelve of our twenty largest cities have port facilities. The resultant lives lost, damage, panic and economic chaos of a nuclear terrorist attack would immediately lead to the declaration of martial law.

All of these scenarios result in the declaration of nationwide martial law. Under martial law, the President may unilaterally and legally suspend Constitutional provisions, guarantees and ‘rights’.

The purchase of 1.8 BILLION rounds of illegal hollow point ammo, the distribution to militarized police forces of 2700 light duty tanks and the arming of nearly all federal agencies can have only one purpose; preparation for armed civil unrest and the arrest of political dissidents. That would of course create a new civil war, potential secession and the fracturing of the US military. Which the left might not win, so a better strategy is for Obama to declare martial law and mostly refrain from controversial moves with one exception; Obama could under martial law, extend amnesty and citizenship to those 15-50 MILLION “undocumented” democrats. He could then, just before he ends martial law, hold new ‘elections’ under martial law knowing that 70+% of those 15-50 million new ‘voters’ will vote democrat and voila, permanent one-party rule in AmeriKa begins. That is so because now the left would have the political leverage to ‘legally’ amend the US Constitution as the left desires and that is… ‘game over’. America and its constitution could be legally amended by the ‘new’ majority into the United Socialist States of AmeriKa… As the US Constitution is the final barrier to “fundamental transformation” and its legal amendment necessary to keep the US Military on the sidelines, any strategy by the left must incorporate that into its strategy of transformation.

Failing all of this, the left has one last arrow in its quiver, for if it cannot successfully transform America, then their ideology demands that America must be destroyed and that is where our external enemies come into play. This country is entirely vulnerable to an EMP attack (5) with nuclear weapons exploding a few hundred miles above the earth’s surface. Both N. Korea and Iran are suspected of working on ‘superEMP’ weapons and certainly China and Russia are capable of creating them.

There has been Senate testimony from experts as to this threat and no less an authority than former CIA Director James Woolsey has recently spoken of it;

“The reality is that seventeen networks of our critical infrastructures all depend on electricity to function. If the electric grid goes down, (due to an EMP attack) we are back in the 1880s pre-electric grid, and … If the food, water, and transportation networks go down, US government studies show that about two-thirds of the people will perish within a year. Other studies estimate that 90 percent would pass away. The basic parts of the grid could be fixed for about $2 billion dollars, which is the amount of military aid we give to Pakistan every year.”

Finally, consider that such an EMP attack does NOT require launching easily traced missiles that would result in retaliation from our nuclear subs. Since 2010 a Russian company has been selling on the open market a ‘missile system in a commercial shipping container’ (6). All an enemy of America, State or terrorist group with nukes need do is buy three of those systems. Load them aboard three commercial ships bound for US ports on America’s east coast, west coast and Gulf of Mexico, then when close to port but still well into international waters (12+ miles) launch those missiles on a preplanned trajectory and detonate them over our west and east coasts and mid-west. Given that those missiles need only travel a few hundred miles, there would be little chance of interception and no evidence of who launched them and, if no one claimed responsibility, we wouldn’t know against whom to retaliate.

Goodbye electricity, basically all electronic devices and most cars, trucks and transportation. That crashes the medical network and the distribution of medicine, food and water… Experts predict that it would take decades to replace the critical transformers that make electrical distribution possible, so no electricity for decades and the death of 231 to 315 million Americans within the first year. Under those conditions, collapse of the government is certain and, invasion by China or Russia would be highly likely.

Given that this administration is facilitating all of these internal and external threats to America, the conclusion that all of this is intentional is inescapable.